A fireman and his rescue dog on a mission 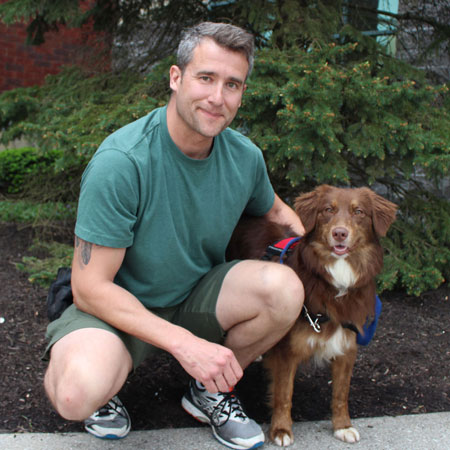 Penelope, an Australian shepherd mix, has an important mission: helping her person cope with Post Traumatic Stress Disorder (PTSD). Nathan is a fire fighter. Over the past decade, his family had noticed a significant change in his behavior at home and interactions with his loved ones. Years of dealing with traumatic events as a first responder, have taken a toll on his ability to cope with everyday life. Penelope has been trained to prevent or interrupt his emotional outbursts and help him face triggering situations with more control.

Military veterans have brought attention to PTSD, a debilitating condition that can develop after a traumatic event. According to the American Psychiatric Association, PTSD “is a psychiatric disorder that can occur in people who have experienced or witnessed a traumatic event such as a natural disaster, a serious accident, a terrorist act, war/combat, rape or other violent personal assault.” Within a month to several years of the event, a person might start having nightmares or develop severe anxiety in otherwise normal situations. Flashbacks, memory changes or feelings of numbness and detachment from family and friends can occur. Other symptoms could involve self-destructive behavior and feelings of guilt or shame. Anger, irritability, fear and aggressive behavior are also common.

PTSD does not just happen to combat veterans. It can affect anyone. In the U.S., 3.5% of adults will be diagnosed with PTSD in their lifetime. What is less known, is that we don’t need to experience a traumatic event first hand. Learning about someone’s death or trauma could also affect us. Repeat exposures to the horrible details of trauma or child abuse cases, such as police officers taking testimonies in the course of their work, may also lead to PTSD.

Firefighters are generally the first ones to get to an accident scene. They never know what to expect and must prepare for the worst. The victims could be severely injured, sometimes trapped in their car, burned or dismembered. As human beings, first responders can’t help but relate to the people they assist and feel compassion and care for them. They are expected to be strong, to stay on task and to quickly get the victims to the nearest hospital. Over the years, the only way to cope with one traumatic event after another is to bottle up any emotion and get numb to their own feelings.

“I was holding it together during the day, but I was on edge in the evening”, explains Nathan. “As a father, I’m supposed to enjoy my kids, but their laughter and giggles had become irritating noise”. Most of his colleagues would never guess that Nathan is struggling. He’s good at what he does and like most firefighters, they don’t talk about what they are going through. There is an unspoken expectation that they can deal with anything and go through one trauma after the other unaffected. It’s only once the dust settles, once in in the safety of his home that the effects of repeat exposure to the horrific situations sets in. Nathan is easily irritated, angry. He’s detached from his family and doesn’t seem to enjoy spending times with his wife and children. “My wife told me that I was no longer the man she had married”. That was my wakeup call.

Looking for a solution, Nathan and his wife Kim contacted Medical Mutts, a service dog organization that trains dogs for psychiatric disorders such as PTSD. But unlike most service dog organizations, Medical Mutts doesn’t breed dogs but instead, trains dogs that they get from rescues and shelters. Penelope, a beautiful year and a half red Australian shepherd mix, was brought to Medical Mutts by Friends of Hancock County Animal Shelter where she had been surrendered. After many months of specialized training, Penelope was ready to be placed with Nathan as his Psychiatric Service Dog.

“I learn from working with Penelope how important it is to focus on what she does well instead of on her mistakes. This makes me rethink my attitude with my family and helps me develop new habits”, explains Nathan as he goes through Team Training with his new dog. Team Training is a time when dog and handler learn how to effectively communicate and form a working team. At Medical Mutts, all the training is based on positive reinforcement and the handler must learn how to effectively reward the right behaviors. There is no need for punishment or harsh commands. Penelope will respond to a whisper or hand signal with enthusiasm and joy.

Once back home, Penelope will be alerting Nathan anytime his emotions start developing. She has learned to smell any change in his mood and immediately poke him with her nose. She will keep him calm and focused during routine activities such as grocery shopping or family gatherings, and will provide him with a loving and calming presence and he goes through the day. Over time, their relationship will get stronger and deeper, each relying on the other. With her help, Nathan hopes to gradually go back to a better mental place and rediscover the joys of being a loving father and husband.